Of all the metals we tend to put AURUM as the pinnacle, the top of the tree but from Scholtens excellent analysis of the periodic table it is PLATINA that is in series 10 (The summit where everything comes to fruition) and the Gold series that relates to leaders (leaders of countries and leaders in one’s chosen field).

Then, when we look to the rubrics we see that there is a certain rigidity, even at the point of glory, that turns this huge potential towards the negative. This rigidity shows in the rubrics: HAUGHTY, CHARLATAN, concerned about social position and Religious affections with taciturnity, haughtiness, voluptuousness and cruelty.

The remedy, along with AGARACUS MUSCARIUS, is also well known for its issues around size. AGARICUS: DELUSION spoonful of water is a lake. PLATINA: Maybe still in the sexual area with DELUSIONS as to greatness of body parts but also legs grow larger and longer. DELUSION he is taller.

Is any of this really helpful?

Interestingly we need to turn to Lewis Carroll for an 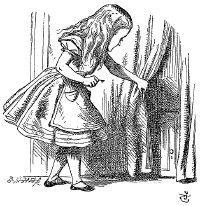 answer. PLATINA has DELUSION he is too large entering the house after walking and DEULSION everything in room is diminished while she grows tall. Both these remind us of Alice in Wonderland. The story of Alice’s journey to sexual maturity, where she eventually steels the “heart’ from the queen of hearts. Winning the queen’s toy boy, the knave. The remedy is a mixture of both the Queen and Alice. “Off with their heads” the contemptuous queen cries. 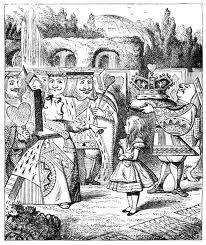 So in PLATINA there is attractiveness, joy, mental agility, social prestige and yet they are all so vulnerable, both from the outside and from the individual themselves.  They are over sensitive, to odors, noise and pain but also all external impressions.

In Peter Beagle’s “The Last Unicorn” the unicorn is the idealised, pure feminine, sexual and wise united in one body, untouchable by men. Immortal. For her quest she takes on the form of a young woman, mortal – she steps down into the world of men and women, this is PLATINA and takes up a quest for true love and a valiant young prince to rescue the unicorns. The male rage and anger against all women (in the bull) trying to contain woman is pitted against the innocent magician and the prince. This animation shows the relationship between PLATINA and BELLADONNA.

The metal is very refined and its strength and malleability means it is used to set diamonds. It is also the material that is in all our cars, as a catalytic convertor, refining all our fuels to gives us better collective performance.

PLATINA often dresses in stark colours (often black and white) and wears hard lines. Tailored clothes for women, high heals that restrict walking. They also have issues with walking down stairs, trip as they descend, or feel they will. This relates to the vulnerability of PLATINA as a leader.

PLATINA has high ideals and expectations. They feel they deserve the best but don’t seem to have worked too hard for it the way NUX VOMICA does. Instead they just expect to have it. Social conditioning can play a role. They are often groomed by their upbringing. They can be developed as leaders, or the best at things or have there abilities squashed or perverted and this will show in the all important sexual side of their life.

The need to shine and be a leader and the issues around sex raise the idea of a remedy somewhere between SILICA and STAPHYSAGRIA but PLATINA is on a journey, is more outspoken and ostentatious than either of these two remedies.

When you meet the PLATINA in the consulting room they may be showing wounded pride, or contempt for others, or wanting to leave her young family (DELSUION doesn’t belong to her family). There may be strong colic pains or ovarian pains (historically remedy for painter’s colic – PLUMBUM is close on periodic table and would have been the basis of paint at the time). They may make light of things (DELSUION objects are smaller).

Cramp like drawing pains everywhere, in their teeth, in their legs, in the ovaries. HEADACHE: cramp-like squeezing pain.

Sensation of constriction in Stomach and abdomen, not unlike the tight clothes they like.

DELUSIONS: superior, alone, alone in the world, noble, proud, under supernatural powers, talking with spirits, tall, swollen, rich, everything is too narrow, small, possessed by devils.

All sorts of sexual problems: Vaginismus from excessive sensitiveness of sexual organs – can’t were tampons, worse vaginal examination, have to sleep with their legs apart.

< pregnancy <child birth and after

Hatred of men who don’t fulfill their sexual expectations.

One thought on “Platina”